Yvonne De Carlo (1922 - 2007) was a Canadian-American actress, dancer and singer who became an internationally famous Hollywood film star in the 1940s and 1950s.

In this movie she did some "bellydancing".

Hotel Sahara, situated in a desert oasis owned by Emad who wanted to quit the place to avoid the hostilities of the Italian army in North Africa. Emad's girlfriend, Yasmin, prefers to stay to save the hotel as it is all he owns.

They succeed. Next are the British arriving among them. Major Randall and Captain Cheynie who both try to catch Yasmin's attention. Then the Germans show up and requisite the hotel.

Yasmin provides a distraction during a party for the visiting Arabs, dressing up in the departed Fatima's costume and performing a belly dance to let Captain Cheynie flee the hotel. 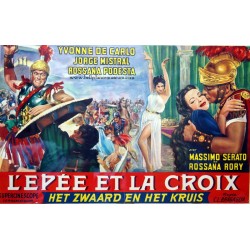