Collins became later one of the leading stars of the television series "Dallas".

One of the famous original belgian movie posters, "Land of the Pharaohs", an action movie of 1955, in terrific shape. Featuring the young Joan Collins in bellydance costume. Collins, who would later become famous in the series "Dallas", besides Sydney Chaplin, brother of...

Hawks (1896 -1977), a versatile director who also made "Gentlemen Prefer Blondes" - starring Marilyn Monroe - in the same period. Howard Hawks is now considere one of the great directors of all times. 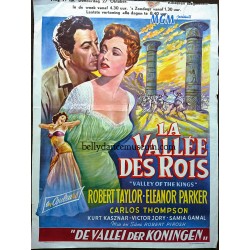