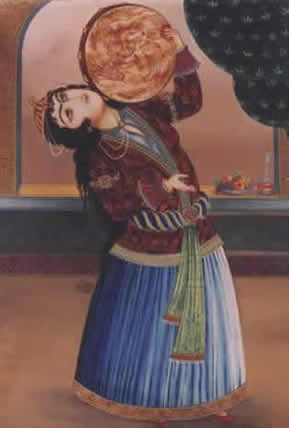 Frame drums are one of the oldest instruments on earth and were probably first used in the Middle East and Central Asia.. It's exactly in those regions that they're still widespread and frequently used in all kinds of music from religious, trance to secular music. Trance or healing music includes the ceremony of zar. In the dzikr, a religious practice, the use of frame drums is permitted as well as in religious songs. The female figure playing frame drum is from around 9th or 8th century BC.

A frame drum is any drum whose head diameter is larger than its shell depth or in other words a hoop-shaped drum with a skin on one or occasionally both sides.
The Middle East and Central Asia has a few types of frame drums.
Frame drums are one of the oldest types of musical instruments, and can be found in many different cultures all over the world such as Egypt (reqq or riqq,deff or daf and mazhar), Ireland (the bodhrán), Siberia (Shamanistic drum) and North America.
In Afghanistan, the Daira is simular to the bendir but instead of strings it has ring jingles on the inside of the heavy wooden shell. Azeri and Uzbeki musicians call it Doira.

The Bendir is a percussion instrumen popular in Morocco and Algeria (as bendayr). Very typical are the strings - called zanzana or uzmân - attached to the underside of the head to give it a characteristic buzz. The bendayr has a hole - thît or eye - in it's frame, permitting to pull the thumb through it and played it upright. Unlike the Tar and Deff the other framedrum instruments widely used in the islamic world. 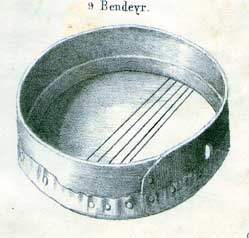 The membrane of the bendir is made of animal skin on a frame of wood with a thumb hole in it. Three or sometimes 4 strings are attached on the back to make a resonant sound.
The characteristic unique thick sound - a combination of resonance and low drum comes by the snares that make a buzz when the drum is struck.
This instrument has a dominant role in Morroccan folkmusic, mainly by the Amazigh and Berber population.

Deff, duff, dap: inlaid frame, goatskin (some camelskin), no cymbals
There exists also an european version of the duff. The Adufe is a percussion instrument traditionally used in Portugal (Beira Baixa region).
Traditionally only played by women, it is also occasionally played by men.
This percussion instrument is composed by a squared structure in wood, generally pine, mounted by a goat skin, stitched on the sides. In the interior cereal seeds or small stones are placed to make the sound of the adufe. It resembles the egyptian riqq in form.

The Tar is actually North African in design, characterized by a large cut-out in the shell to facilitate holding the drum upright. A taraa is bigger in size.
A tar or reqq is just like our tambourine. Mostly nicely inlaid with mother of pearl and with a fish skin. A bigger version with a camel skin as membrane is an important instrument in Egyptian oriental orchestras.